The Echigo plain.
The Nakanokuchi and Shinano Rivers run like threads stitched through the rice paddies.
In the distance, Mount Yahiko looks over the land.
The mountain and the copper found within transformed Tsubame-Sanjo and brought it to life with the sound of hammers.
For us, this everlasting sound is a tribute to the life given to us and a pledge to continue our work for many more years to come.

In the early Edo period (1603 - 1868), the Shinano River, which flows through Tsubame-Sanjo, was flooded nearly once every three years and agriculture as well as the lives of people suffered enormously. The prefectural governor during this period hired a blacksmith from Edo (present-day Tokyo) to live and work in the region and teach local farmers how to produce Japanese nails. As time went on, what started as a side business in bad years, slowly became the main source of income for more and more people. The use of hammers in Tsubame-Sanjo was taking root.

Demand for nails steadily increased as Edo constantly faced the need to rebuild from frequent fires and natural disasters. Tsubame-Sanjo gradually developed as the foremost nail producing region in Japan.

As early as the 1650s, artisans in what is now present-day Tsubame were being commissioned to make copper fittings and other ornaments for shrines. By 1700, with the discovery of copper in the neighbouring mountain of Yahiko, copper ornaments would become as common a specialty as iron nails. It is believed that the Tamagawa family had specialized in this sort of work three generations before Gyokusendo's establishment.

Copperware: Tools of Use

The diffusion of metal working techniques particularly in copper fixings for shrines and iron nails (wakugi) meant that Tsubame was establishing itself as an area built by the hammer. Just as a steady supply of copper was being mined from Mt. Yahiko, an artisan named Toshichi left Sendai, crossed the Japanese Alps and settled in Tsubame in 1768. He brought with him tsuiki, the hammering technique by which a vessel is created from a copper sheet.

This hammering technique was eventually passed down to Kakubei Tamagawa who founded Gyokusendo in 1816. He became known by locals as "Yakanya Kakuhei" (Kettle Maker Kakuhei) as he and his apprentices established themselves as makers of household items such as kettles, pots, and wash bins.

In Niigata during the mid-to-late Edo Period (1603 - 1868), copperware had become one of the largest artisanal industries, second only to textiles. At this time, businesses with more than 5 people were considered big and there were 8 such companies working in textiles, 3 in copperware, and 2 in casting.

In 1901, the Minister of Agriculture and Commerce recognized Kakubei Tamagawa posthumously for his contribution to the establishment of Tsubame's copperware industry. 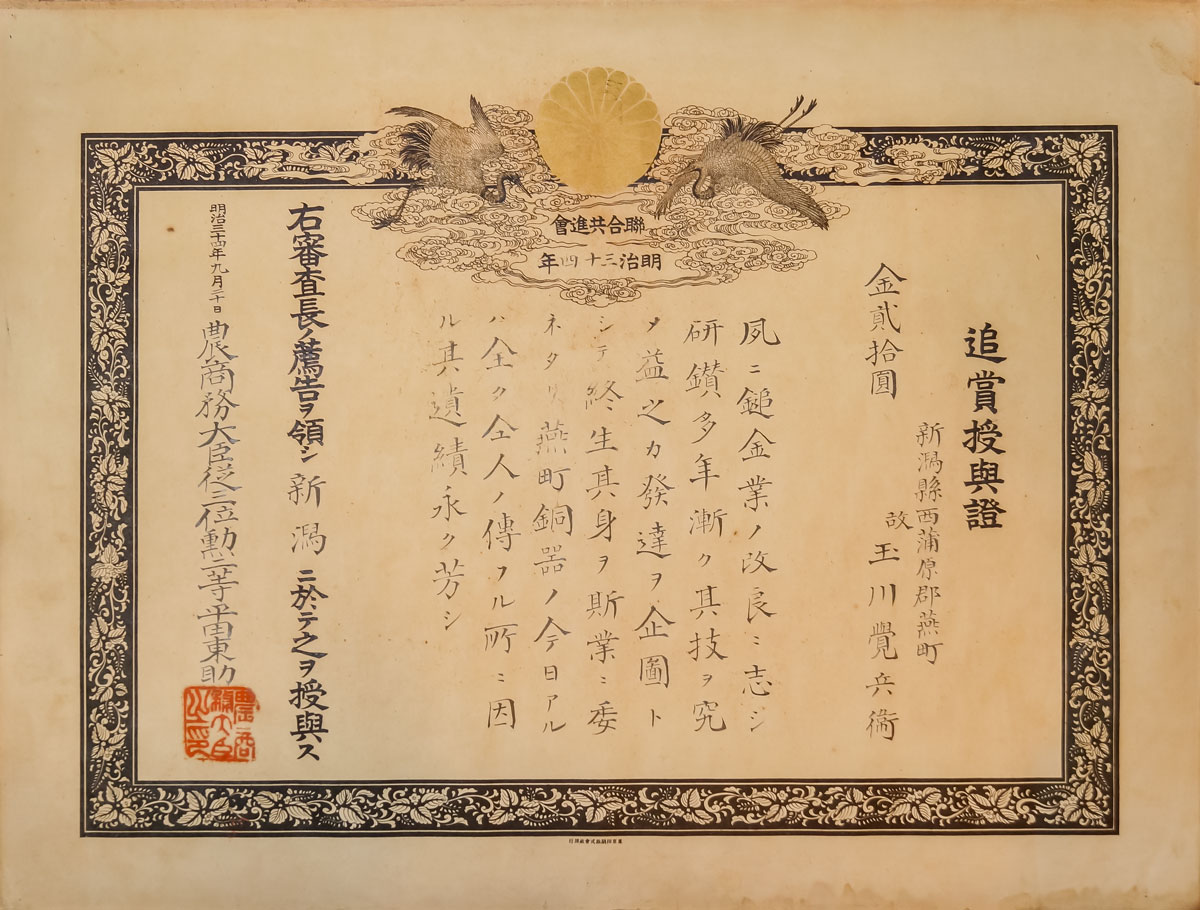 From Tools of Use to Works of Art

In 1868 the Meiji government instigated large shifts in the metal working and other artisanal industries.

The government actively sought to include these industries in international expositions in order to gain attention and drive exportation. This would help the acquisition of resources to drive industrial growth throughout the country.

Responding to this, many producers who had been primarily making simple items for daily use, shifted focus to creating pieces that would showcase aesthetics and skill in craft. Gyokusendo was among the first workshops to make their international debut, presenting their works to showcases all over the world.

Riding on the momentum of the Meiji government's initiatives, Kakujiro would set out to create works worthy of international praise. In 1873, Japan would make its international debut at the World Exposition in Vienna and Kakujiro Tamagawa's pieces would be among those on display. The small workshop that his father established in 1816 took the name Gyokusendo for the first time.

After Vienna, Japan became a regular participant at expositions overseas. The Meiji government even commissioned such events domestically and so the level of Japanese craft continued to evolve year after year.

Gyokusendo for its part participated in expositions both domestically and abroad and contributed greatly to that technological evolution.

Pushing the Bounds of Tsuiki Copperware.
Craftsmanship to Fascinate the World.

In 1882, Kakujiro’s eldest son, Kakuhei, became the third head of Gyokusendo at the age of thirty.

Encouraged by the government, local producers continued to submit their works to expositions all around the world and Gyokusendo had been chosen to represent Japan in metal work. Kakuhei, however, was concerned that the techniques used currently in Tsubame were not enough to really compete on the world stage.

Continuing where his father left off, Kakuhei wanted to incorporate even more new ideas and techniques into Gyokusendo. The change of leadership was the impetus needed to really shift gears.

A decorative incense burner with a crow and heron.
Kakuhei Tamagawa, Third Head
1890

Kakuhei sought to not only master the hammering techniques of the previous generations before him, but also successfully incorporate decorative techniques into copperware as well.
He commissioned Katei Taki (滝和亭), a Nanshu painter from Tokyo, and Ungai Kaeriyama (帰山雲涯), a Japanese traditional painter from Sanjo, to create the engraving designs. He then applied an unorthodox technique of using only hammers and anvil stakes to emboss the designs.

Kakuhei believed that in order to further advance the artisans' craft, it was necessary to incorporate techniques and methods from regions other than Tsubame and Sanjo.

The Sword Abolishment Edict of 1876 led to the unemployment of many sword smiths and engravers throughout Japan, including southern Niigata's castle town of Takada (present day Joetsu city). There he recruited a number of tsubashi, artisans who specialized in the creation of intricately designed handguards. To guide their work he also invited a leading engraver from Tokyo to act as foremen. A plating expert was brought in to further develop Gyokusendo's colouring processes.

The workshop itself was expanded to accommodate the increase in artisanal manpower, and with its completion in 1890, Kakuhei thought Gyokusendo was finally ready for another attempt at international recognition. 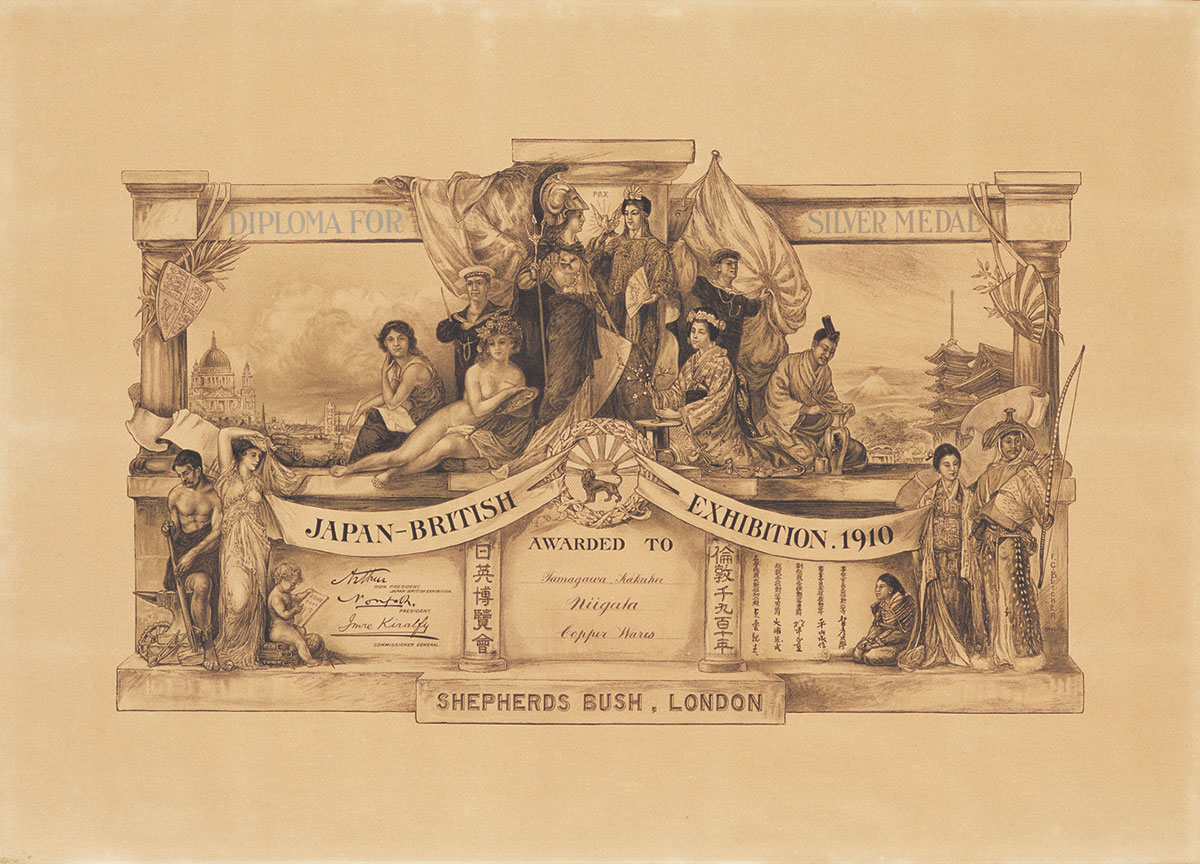 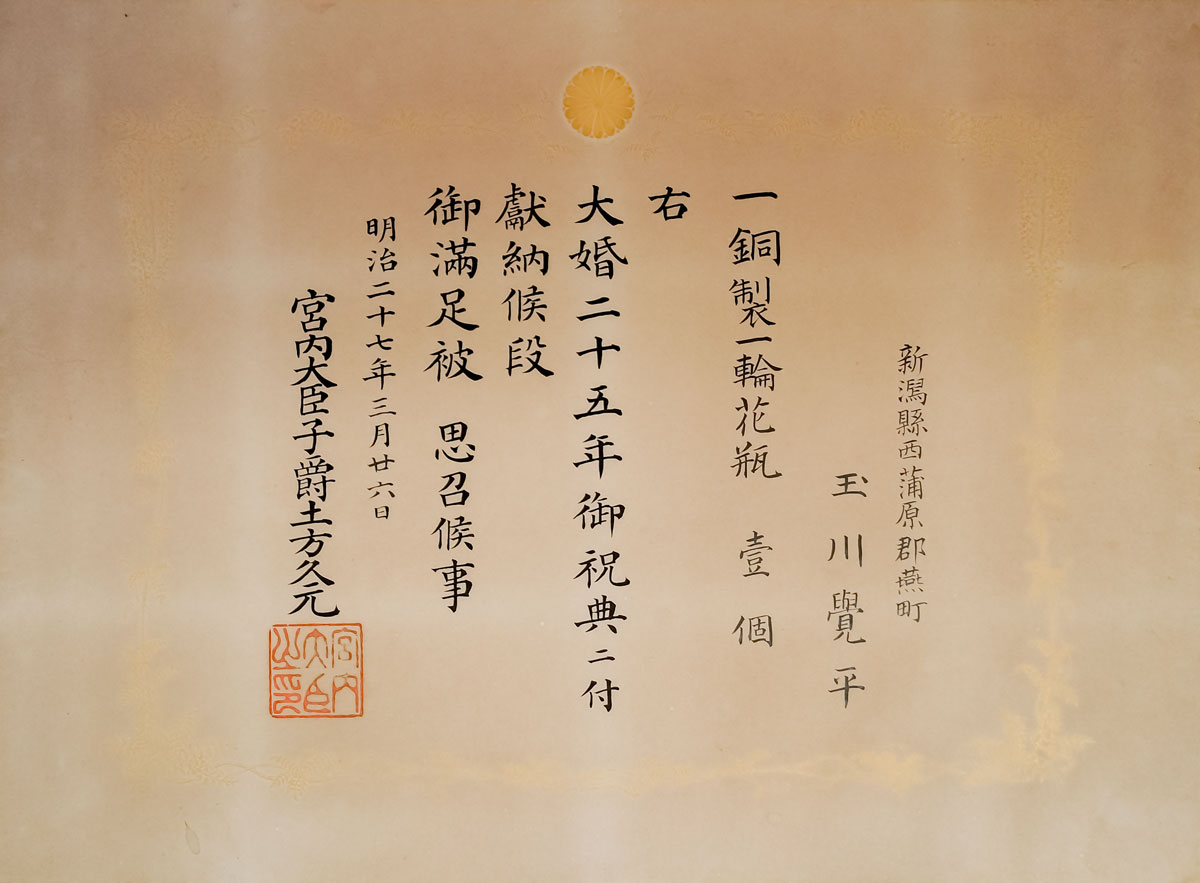 Gyokusendo produced piece after piece of exquisite craftsmanship and international recognition quickly followed. Most notable accolades include silver metals at the Columbia Exposition in Chicago in 1893, the Louisiana Purchase Exposition in 1904, and the Japan-British Exhibition in 1910.

The Third Head, Kakuhei Tamagawa, strived to train apprentices and contributed his time and energy to the development of the copperware industry. 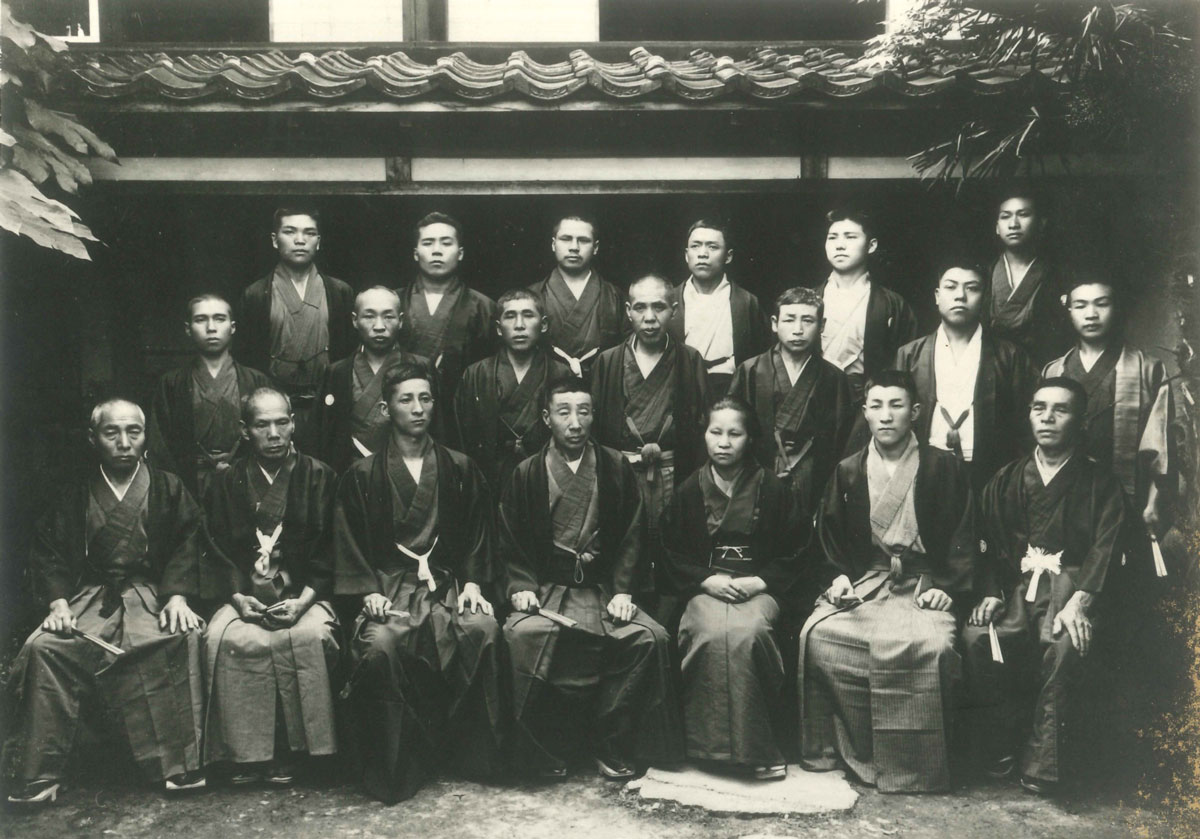 Successive awards at international expositions led by the engravers from Takada and Tokyo contributed to a long period of success for Gyokusendo. As these artisans got older and started to retire, however, it became apparent that without training younger apprentices to take their place, their expertise was in danger of disappearing.

Rather than inviting more engravers from outside the company, the Third Head Kakuhei thought the best way to pass down the techniques was to train someone within the family. He apprenticed his eldest son, Kentaro, to Imperial Household Artist Unno Shomin and later even enrolled him in the Metal Engraving Department at the Tokyo School of Fine Arts (present-day Tokyo University of the Arts).

In 1904, Kentaro returned to Tsubame having studied with the leading masters in the discipline and sought to apply what he learned to the development of new works.

Kentaro, like his father before him took the hereditary name Kakuhei and became the 4th Head of Gyokusendo, eventually leading the workshop to win the top prize at Philadelphia's World Fair in 1926.

Receiving the top prize was the achievement of a long held goal and affirmation that their level of skill was among the best in the world.

The dedicated artisans taking after the Fourth Head's industriousness helped lay the ground work for many of the works iconic of the brand today.

One of the great developments during this time was the 'seamless spout,' a technique by which artisans could create a kettle or teapot body and spout, together from one sheet of copper. The ingenuity and skill required to complete this became widely talked about not only in copperware, but in other traditional crafts as well.

Colouring fundamentals also take root at this time under the Fourth Head. The techniques, which are still used today, create unique colours that grow and deepen with use.

The evolution of colouring techniques in combination with shaping allowed artisans new possibilities to express their craft. This was a development that allowed not only Gyokusendo but the copperware industry as a whole to add another page to the history books.

Despite the success, however, the Great Depression that would devastate the United States in 1929 would hit Japan not a year later and many of the copperware artisans in Tsubame would take up jobs in construction, just to make ends meet.

If Gyokusendo relied solely on the market in Tsubame, it would likely lead to its demise. It was then, in 1930, that the Fourth Head reached out to an ally, Tatsuji Suzuki, the principle of Yokohama Technical School (present-day Yokohama National University). With his help, Gyokusendo would establish a branch workshop in Yokohama as a last-ditch effort to stay afloat.

From War to Reconstruction

Since the Fourth Head had no children, his younger brother, Johei, took the name Kakuhei and became the Fifth Head of Gyokusendo in 1930. He travelled with five other artisans from Tsubame to Yokohama to help establish a branch workshop.

A city of few traditional crafts at the time, Yokohama became a strong supporter of Gyokusendo and helped encourage the growth of hand-hammered copperware in the region.

In commemoration of the opening of the workshop, the city presented a gift made by Gyokusendo to the Kaninnomiya Family, a branch of the Imperial Family. Another gift was presented to the Empress the following year.

While managing the Yokohama workshop, the Fifth Head devoted his time and energy to building strong connections with local department stores by travelling all over the greater Tokyo area and surrounding prefectures. Familiarity with the brand slowly grew.

More artisans were brought on at home in Tsubame as well as in Yokohama with the intent of further increasing production and expanding sales channels.

Success was short lived. In 1937, war was officially declared between Japan and China. Restrictions on the use and purchase of copper as well other metals made it near impossible to continue production.

Taking advantage of it's superior tensile strength, aluminum was used as an alternative to make decorative plates. This effort too was all for not as Gyokusendo found itself helpless with the Japanese economy in a steady downspin. 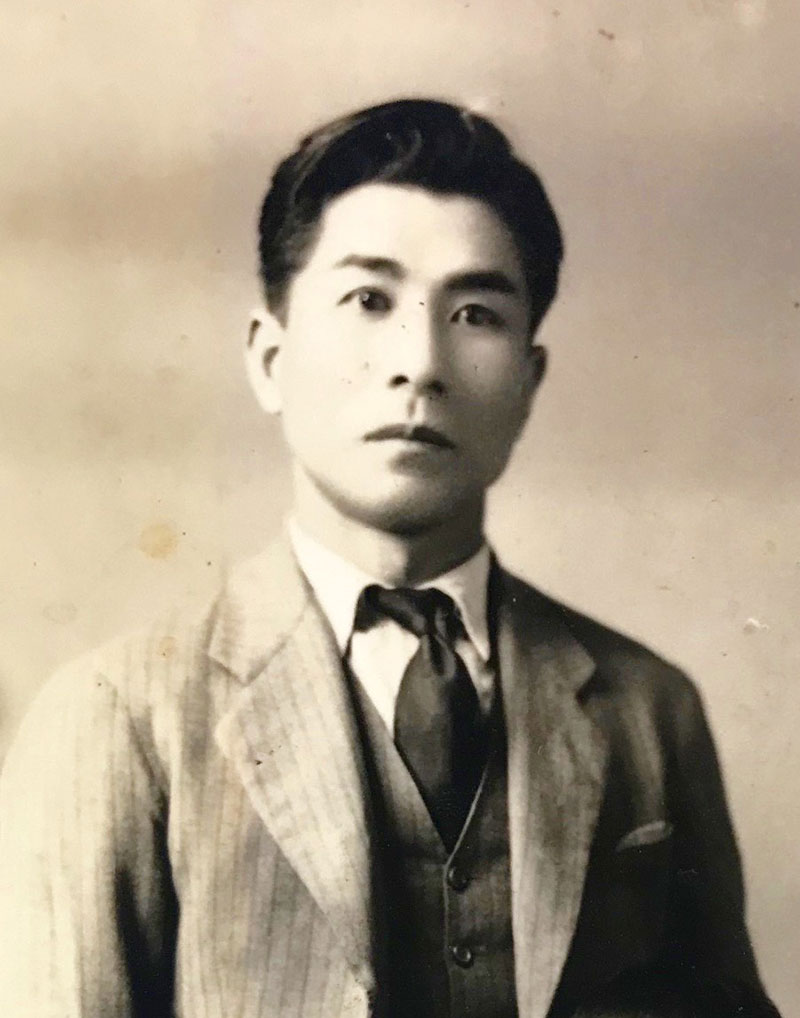 As war intensified, the Japanese government strengthened the Metal Collection Act forcing the Yokohama branch to close. The following year in 1943, Tsubame too was shut down and all the craftsmen discharged.

Kakuhei was at a loss, but he was driven to move forward. He assembled craftsmen that had a familiarity with steel and established the Tsubame Aviation Company to build airplane parts for military aircraft.

When the war ended in 1945, Kakuhei spent the next couple of years calling back the artisans and starting operations again in Tsubame.

The situation was unstable however and a spike in the trading price of copper would again threaten to put Gyokusendo out of business. Kakuhei approached Niigata Prefecture so as to be recognized for the uniqueness of their craft. Then in 1958, Gyokusendo's tsuiki copperware was designated as an Intangible Cultural Asset by Niigata Prefecture.

The economy gradually improved and traditional crafts became more popular. Slowly but surely, more artisans returned and finally the rhythmic sound of hammering copper could be heard in Tsubame once again.